Welcome to the AD Formula review.

A few days ago, I had the opportunity to review another website that looks like a copy-paste version of this one.

Both sites claim that you can get rich quickly if you fill in your details and become a ‘beta-tester.’

These guys claim that you can make money without having to do a thing.

Just fill in the form, buy some banner ads, and watch how the profits grow.

But if it’s so easy to make money, don’t you agree that everyone would be doing it?

Unfortunately, those who unfortunately fall into a trap could lose a lot of money.

The only person who is really making cash is the person behind this scheme.

So is the AD Formula a scam or legit?

By the way, congratulations on researching before giving away your hard-earned cash.

If you are tired of scams and fake websites, check out the best way to make money online.

In this AD Formula review, I show you what’s really behind the webpage and a few scam signs as well.

Jack Heaton claims that AD Formula is a revolutionary system for making money online using nothing more than the power of banner ads.

It’s not a get rich quick scheme or a passing trend. It’s also not some fancy software either.

The system provides members with a passive income, and it does everything for you. Wow!

In other words, it means that this system is every person’s dream come true.

I’ve heard this several times before. How about you? Sounds familiar?

You see, Jack claims that you can make money every time someone clicks on your banner ad.

Also, you can even sell banners for up to five times or higher than the price you paid for it.

But once again, it would be freaking amazing if the system works.

I’ve researched the net for hours to find a legitimate platform or a website that can offer the same service.

Guess what I’ve found? Nothing!

This whole banner ad flipping thing is a scam designed to put its hand into your wallet.

Who is Jack Heaton?

They did an excellent job to make you think that Jack Heaton is the man.

However, if you google the name Jack Heaton, CEO & founder of AD Formula, the results you’re going to get are similar to what you are about to read here.

In other words, Jack Heaton is a fake character. He doesn’t even exist. I’ll prove this at the end of my AD Formula review.

What’s Behind the Webpage?

The AD Formula webpage is a funnel, meaning, that it’s designed to lead you onto something else.

I’ve reviewed a few others that are doing the same thing. And every time it ends the same.

In other words, it turns out to be a scam.

In this case, you are redirected to a platform called Blue Lable from where you can start “flipping banner ads.”

As it turns out, it doesn’t even exist.

But here’s what I did found. If you take a look at the image below, you’ll see two same websites. 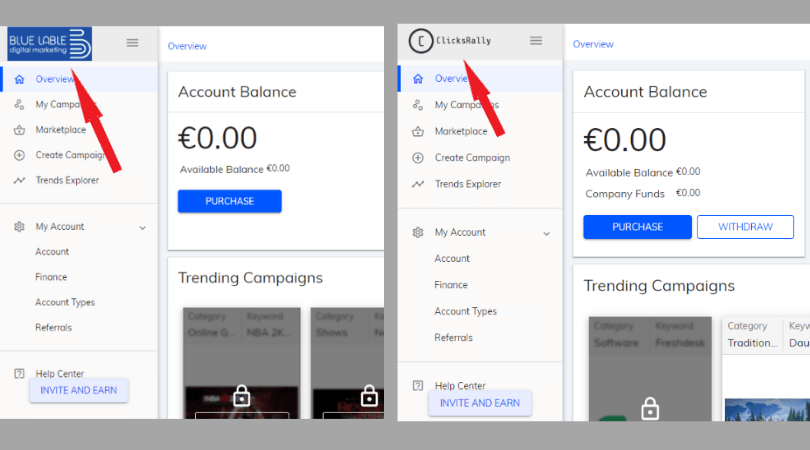 Blue Lable is a just rebranded version of Clicks Rally.

In other words, both sites are designed to scam you for your hard-earned money.

How Does AD Formula Work?

To make this work, all you need to do is buy the banner ads of your choice.

Now every time someone sees your banner ad and clicks on it to make a purchase, you get paid a commission.

And of course, the more banner ads you own, the more money you make.

But the reality is a bit different.

You see, the more banner ads you own, the more money Jack, or whoever is behind AD Formula scam, makes.

The whole system is rigged to steal your confidence.

They trick you into buying more and more ads by making you believe that you are making money off the same.

But if you try to withdraw the money, you’ll stumble upon a wall of silence because the company doesn’t even exist.

In other words, you realize that you’ve been scammed.

Can You Make Money With Banner Ads?

A short answer is no. A bit longer answer would be, hell no.

There’s no chance that you can make money flipping banner ads!

This is what happens if you try to deposit your hard-earned cash in the hope that you’ll make some money with AD Formula.

As soon as you buy a banner ad, you’ll start winning money.

Naturally, because we are all greedy by nature, you’ll begin to put even more money because it’s a logical thing to do.

But little did you know that the whole thing is designed to work that way.

Now once you decide that it’s enough and try to withdraw your winnings, you’ll be ignored by the side of the company.

In other words, you’ll realize that you’ve been scammed and that the whole thing was set against you ever since the moment you’ve laid your eyes on that video.

How Much Could This Cost You

The spokesperson from the AD Formula video hasn’t mentioned how much you need to invest if you want to start.

He claims that it’s free to join and begin flipping these ads.

But once you access the Blue Lable platform, you’ll see that all banners are locked.

It means that you’ll have to take at least a Starter package to get going. That is going to cost you $300 to start.

However, based on everything that I wrote here in this AD Formula review, you know that it’s all fake and I know you won’t deposit a cent.

AD Formula Signs of a Scam!

The only money that the young man on the image below has earned was the amount he has got for giving the testimonial.

You see, he never tried or had anything to do with AD Formula, it was just a gig for him. 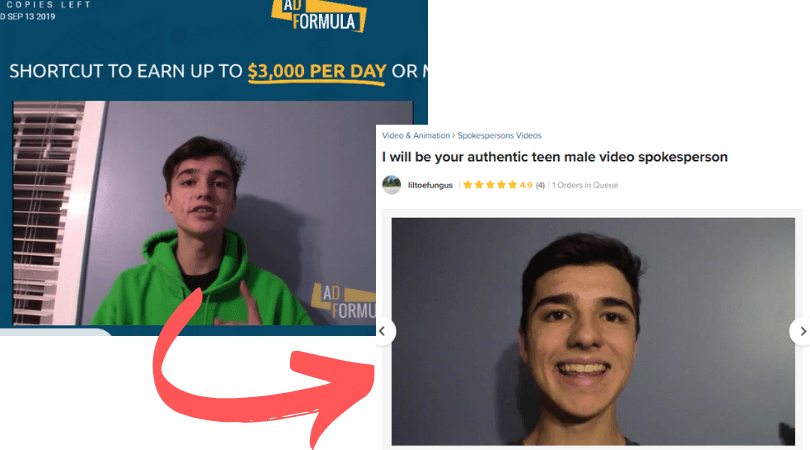 The rest of the gang did the same. They are all actors from Fiverr, a popular freelancing site.

There, they offer a video spokesperson service to people who need one.

As you can see in the image below, there are a few widgets that appear on the webpage.

One is counting down how many copies has left. By the way, it’s a digital product. What copies???

The second one is in the bottom left corner that shows how much some random people earn in real-time.

Guess what? It’s fake, like the rest of the site.

Jack Heaton is a Fake Name

As you know, Jack Heaton is not a real person and here’s the evidence.

A person behind this scam has created Jack’s character to make the whole thing look legit. 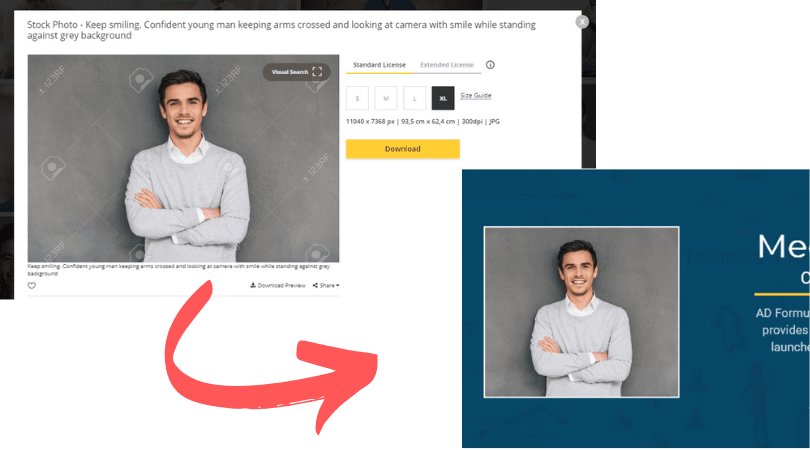 But as you can see in the image above, Jack is a photo model.

You can buy his pictures at stock photo sites like 123rf and others.

The AD Formula scam, like every other fraud, claims that you can start making hundreds of thousands and even millions in just a few months.

These guys flash you, at least a dozen times, with some of the most unrealistic earning claims. 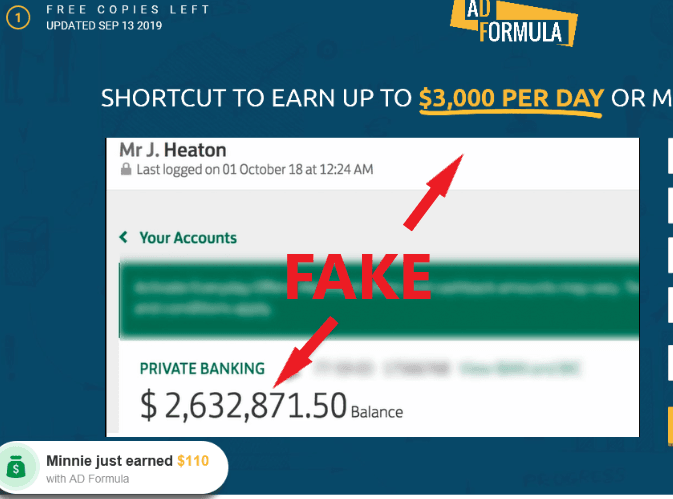 There’s no pushbutton systems or banner ad flipping software that can help you make that kind of money.

The story from the video and the whole idea about flipping banner ads is a product of someone’s imagination.

The AD Formula webpage and AD Code and all other sites that offer the same service are designed to scam people. 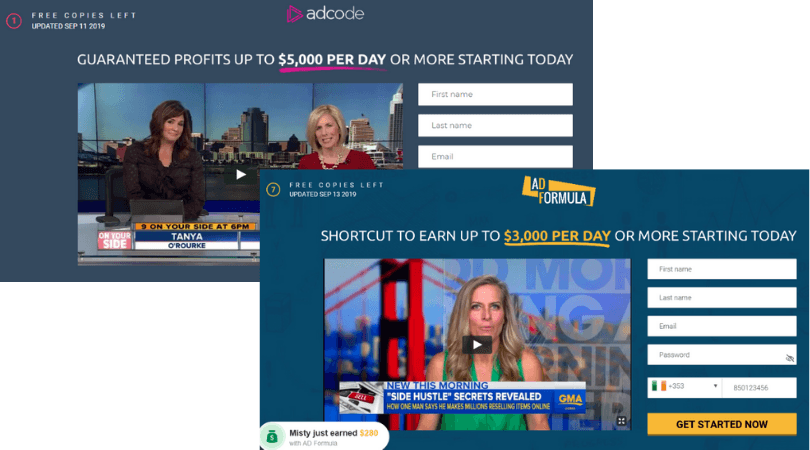 These sites are clones of one another and who knows how many are out there.

All they do is change a few colours, headlines, and the name, of course, to make it look different next time.

AD Formula is a scam. You’ve been given a lot of information to reach the same conclusion.

The whole website is designed to trick people into giving up their hard-earned cash in the hope that they’ll make millions. It’s a cruel and dirty scam, nothing else.

And it’s not the only one out there, so be careful.

In a nutshell, they create fake webpages where they serve you with a lot of BS about making money overnight.

The intention is to get you fired-up about some ground-breaking system that will make you a millionaire.

And that’s just a first step.

After/if you get hooked, you’ll be forced to deposit some cash.

They do so by calling you on your phone or sending you tempting emails.

Then, you’ll start making money to feel confident that you’ve made the right decision and that you can trust these guys.

However, as you know, if you try to withdraw your earnings, the company will completely ignore your request.

Thanks for reading my AD Formula review. It shows that you are a serious person who takes every step with the most attention.

If you are interested in learning how to start making money online, I got here a great alternative to those money-sucking offers.

This process is proved by thousands of online marketers all over the globe.

Make sure to click the button below to learn more!

If you need any help or you have a question, feel free to share them in the comment box below.

25 thoughts on “Is AD Formula a Scam? – See The Warnings In This Review”